A May Anniversary, or Two

Hard to believe, but May 30, 2011, was when I published my first ebook, a literary novel called The Leaving. I did the cover myself and chose Smashwords as the first ebook platform to upload it to. Back then there was no KDP Select, and I felt no hurry to put the book up on Amazon KDP, though I recall I did this sometime in June 2011. Since I didn’t make the Amazon payment threshold the first month, it took three months for me to be paid!

But I was just delighted to get in the game, and in the next couple of years things improved rapidly. 2013-2015 was the golden era, where those of us who were writing erotica did quite nicely, since Amazon paid a flat payment no matter how short the story was. I published all of my backlist over the years. On Smashwords, my erotica shorts took off on Barnes & Noble under a pen name, so I experienced a surprising upswell there too.

In these seven years since I started, the self-publishing landscape has completely changed, but I’m always one for looking back, so I was interested to read CEO Mark Coker’s take on Smashwords’ 10-year-anniversary, presented in one of his characteristically long blog posts!

Here is an excerpt. I like Coker’s sentiments here:

This was the genesis of Smashwords.

Throughout my career, I’ve always been drawn to “change the world” ventures that carry a higher purpose.  I’ve long believed that a life without higher purpose is a life squandered.   Every person with a pulse has an opportunity to take small but significant steps today that will leave the world better than we found it.  It doesn’t matter if you’re a  writer, entrepreneur, home maker, school teacher, garbage collector, artist, doctor, mechanic, baker or retired.  Pick your passion and make a difference.

Writers are some of the most passionate, inspiring world-changers I’ve met.

In late 2004 I set to work on the Smashwords business plan.

I wanted to turn the conventional publishing model upside down.  I wanted to give authors full control over their rights, pricing and publishing decisions, and I wanted to flip the compensation model so that 85% of the net proceeds went directly to the author.

It was also important to me that Smashwords’ interests be aligned with the interests of writers.  Rather than sell publishing packages or charge upfront for our services, we’d offer our service for free and we’d earn our income on commission.  If the author made money, we made money. 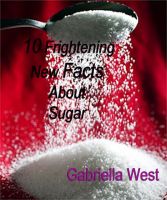 There is one short, health-related nonfiction ebook title remaining that I sell at Smashwords which still has my original Photoshopped home-made cover on it. Here it is, in all of its glory!

It’s been a strange ride, but I have to hand it to Mark Coker for continuing to evolve in what must be an incredibly tough business landscape. The financial terms he offers writers have never changed for the worse, and although some of my peers complain about the visuals of the Smashwords site, I personally think there’s a lot to say for something that *doesn’t* change radically over time. Which isn’t to say that Smashwords hasn’t made improvements. I love being able to check my daily sales onsite and I enjoyed doing their interview feature, where I was able to rattle on about my own writing process and history. Has Smashwords made me a ton of money? Nope, but over time I’ve made about 20 percent of what I’ve made on the Amazon US platform, and with a lot less hassle!