A Hell of a Year 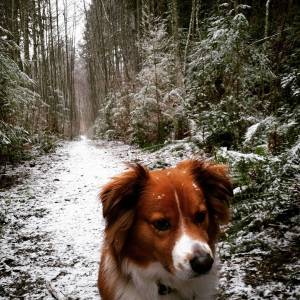 It feels too soon to do a retrospective, but it’s been the kind of year where I uploaded a picture of a Facebook friend’s beautiful young dog running through some snowy woods in the New Year as my desktop image, and by the end of this year, that young dog had died suddenly, riddled with cancer. I still look at his face disbelievingly sometimes. My friend was able to capture a very intent, serious look on her dog’s face, and I sometimes wonder if he was already in pain when she took the image.

–I just saw today that a longtime friend lost his father…from reading his blog.

–I got back into contact with an old friend from a long time ago. It seemed life was going very well for her from her website, but she told me in a Facebook message that she has stage IV lung cancer. And a friend of hers, a writer just a few years older than I am, died suddenly at the end of last year. She was very close to him, so the brutal news of his death was followed shortly by her own diagnosis.

A lot of these deaths are coming to us as pixels on a screen rather than someone telling us over the phone or face to face. It gives the whole thing a rather odd quality.

Everything is distanced, it seems. We connect briefly over the bad news, but the very technology that allows us to connect diffuses the sharpness of the pain.

I have had my own “up close and personal” brush with a parent’s death, and there is only so many times you can do that. We all have to do it at one time or another. That is the kind of grieving that carries an immense cost.

The election was another unnerving, blindsiding kind of moment. Everything is still in flux, but the lines are clearer now: we’re moving towards an immensely corrupt oligarchy in the US. Now we learn officially—from the CIA!—that Russia hacked the election to help Trump. Grief and rage and fear are mingled as we draw closer to this trainwreck in motion. December 19 is going to be interesting, folks. That’s when the Electoral College meets to officially ratify the election. It’s just over a week away…

Each day feels as if it’s about 50 hours long now, what with all the twists and turns and new revelations coming at us.

I have been thinking about how I am going to keep my sanity, and my conclusion is that the healthiest thing to do is to cycle in and out of outrage and a kind of fatalism, to keep informed but to not get completely caught up in the madness of events.

My fantasy, and hope, is that there are many, many people working to defeat Trump, many different groups and forces, and even as he becomes president, these forces will work to defuse him and ultimately destroy him. And even his, or the Republican party’s, worst acts will probably have unintended consequences. Because I think that’s always the way.

I keep thinking of Richard Nixon. I was too young to understand anything about his administration while it was going on, though I did technically live under it for eight months as a very young child before we left for Ireland in 1969.

Nixon’s become a cautionary tale. But here we go again, folks… Although in this case the equivalent to the bomb of Watergate has already gone off and he has yet to be inaugurated!

Joe Biden echoed my own thoughts today when he said to Jake Tapper on CNN that he thought things would start to swing around in 2018. Let’s hope!

When Tapper asked Biden if he thought he would have beaten Trump had he been the nominee, Biden laughed ruefully and said, “I don’t know. Maybe he would have eaten me alive.”

I love that kind of honesty.

We’ll never know. We just have to go on. And yet, the feeling that a whole world of pain is just around the corner is pretty strong. Isn’t it?

2 Responses to A Hell of a Year