Posted on November 9, 2016 by Gabriella West 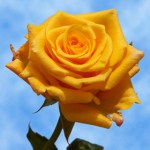 Someone once told me that yellow roses symbolize hope.

Wow. A mixture of feelings here, but one predominates. After watching the increasingly grim CNN election footage for a number of hours and realizing that Hillary Clinton was not going to win, I went on Facebook and wrote, “I personally just want to go tend a garden somewhere.” It was a symbolic statement because I don’t have a green thumb, but perhaps that will come!

So Trump will be our next president. I had feared this in the early months of the election, after the nomination, certainly, and before the debates. I was lulled by the most recent polling data, but I still had bouts of anxiety. Last night all that pleasant complacency was ripped away.

Michael Moore was right. He spoke out early on Bill Maher’s show Real Time and said he thought Trump was going to win. Poor Bill Maher, too, who said he was “shitting his pants” last Friday night… he was right. (Having been the subject of one lawsuit by Mr. Trump, no wonder he’s scared.)

My feelings are less politically partisan than they used to be. I don’t blame Comey, for example, or Bernie. Bernie got a raw deal, actually, and I recognize that. I don’t know if he, or Biden, could have won against Trump. It’s not useful to get tripped up about all that. I do recognize that Hillary Clinton was a flawed candidate. I wanted her to be president. But somewhere, deep down, I never really thought she would get it. I thought the forces against her would be too strong, and that she is an essentially tragic figure, brought down by her own baggage and compromises. Yet the polls seemed to show otherwise, and I allowed myself to hope.

Trump is just so much worse. I wrote on Facebook last night that I was  dry-eyed, chilled, sad for America and for the world. Profoundly sad and in disbelief. Many of my friends were getting very emotional on Facebook last night. It’s strange, I don’t cry over this stuff–I immediately go to a numb, stoic place that shields me a bit. I process traumatic events fast and I work through them fast. I don’t brag about this; it would be better to grieve more like other people, perhaps.

Anyway, I felt the sadness of my friends. I comforted one or two who were in distress. It was helpful for me to be among community, though God knows I feel that social media has contributed to our woes and divisions in this country. Pollster Frank Luntz said recently on 60 Minutes that he couldn’t believe how angry the people he brought together for focus groups on the election were, how they had stopped listening to each other. He blamed it directly on Twitter and Facebook.

I was helped this morning by an article on SFGate.com by Garrison Keillor., entitled “Done. Over. He’s Here. Goodbye.” This was my favorite paragraph: We liberal elitists are now completely in the clear. The government is in Republican hands. Let them deal with him. Democrats can spend four years raising heirloom tomatoes, meditating, reading Jane Austen, traveling around the country, tasting artisan beers, and let the Republicans build the wall and carry on the trade war with China and deport the undocumented and deal with opioids and we Democrats can go for a long brisk walk and smell the roses.

It’s worth reading in full!

My friend David Fredrickson posted about how the election results plunged him into a spiritual crisis when he woke this morning. I found his blog post particularly powerful as well. As David writes, we need each other.

Many of us are hurting. It’s going to be a long four years. Let’s do the best we can, folks. If the best we can do is trudge on, that’s fine. Raising heirloom tomatoes sounds pretty good to me.

Let’s keep talking. And listening. I believe the pendulum will swing back.

1 Response to About last night…