I’m going to keep these short, as none of us have a lot of bandwidth these days.

But yes, it’s surreal. We have gone over 20,00 deaths in the U.S. as of today. In a few days, it will be 50K, most likely. And then, California is supposed to peak in May. I also keep an eye on Ireland, where I still have some family members. There are still fewer deaths there than in California, which makes sense, given the population difference… 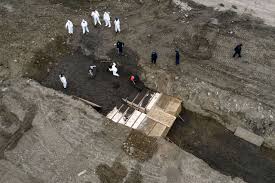 So, a bad week. Some time during the week images of Hart Island came out on Twitter, taken by a photojournalist. These are drone images of mass burials on a scary-looking little island off The Bronx with what looks like a huge Victorian-era building on it. The city is burying 25 bodies a day, seven days a week now. This triggers all of our ancestral memories of plague, famine, the Holocaust, mass graves, I imagine. In New York. In 2020. I must admit, I looked at the pictures with a dread I hadn’t felt in a long time, a piercing pain. I don’t know anyone in New York City right now, but hear news of ambulance sirens on the streets of Brooklyn all day long. And of course we’ve lost people that we shouldn’t have had to lose: Terrence McNally. Hal Willner. Brave health professionals. Ordinary people who died before their time.

While we twiddle our thumbs waiting for our stimulus checks, I enjoyed reading this brilliant, thought-provoking piece by Julio Vincent Gambuto on Medium.

And so the onslaught is coming. Get ready, my friends. What is about to be unleashed on American society will be the greatest campaign ever created to get you to feel normal again. It will come from brands, it will come from government, it will even come from each other, and it will come from the left and from the right. We will do anything, spend anything, believe anything, just so we can take away how horribly uncomfortable all of this feels. And on top of that, just to turn the screw that much more, will be the one effort that’s even greater: the all-out blitz to make you believe you never saw what you saw. The air wasn’t really cleaner; those images were fake. The hospitals weren’t really a war zone; those stories were hyperbole. The numbers were not that high; the press is lying. You didn’t see people in masks standing in the rain risking their lives to vote. Not in America. You didn’t see the leader of the free world push an unproven miracle drug like a late-night infomercial salesman. That was a crisis update. You didn’t see homeless people dead on the street. You didn’t see inequality. You didn’t see indifference. You didn’t see utter failure of leadership and systems.

But you did. You are not crazy, my friends. And so we are about to be gaslit in a truly unprecedented way. It starts with a check for $1,200 (Don’t say I never gave you anything) and then it will be so big that it will be bigly. And it will be a one-two punch from both big business and the big White House — inextricably intertwined now more than ever and being led by, as our luck would have it, a Marketer in Chief. Business and government are about to band together to knock us unconscious again. It will be funded like no other operation in our lifetimes. It will be fast. It will be furious. And it will be overwhelming. The Great American Return to Normal is coming.

From one citizen to another, I beg of you: Take a deep breath, ignore the deafening noise, and think deeply about what you want to put back into your life. This is our chance to define a new version of normal, a rare and truly sacred (yes, sacred) opportunity to get rid of the bullshit and to only bring back what works for us, what makes our lives richer, what makes our kids happier, what makes us truly proud.