(Note: I lived through Loma Prieta in 1989, which is now, incredibly, 30 years ago. The first section of this essay was written in 1999, on the 10th anniversary of the earthquake.) 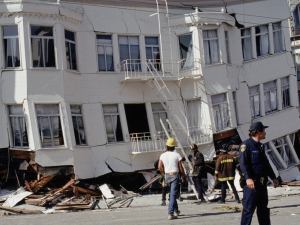 I’d been in San Francisco for a little over a year, having moved here from Ireland in July of 1988 right after college. At 22, I was a grad student in Creative Writing at SFSU, shy and isolated. I was living alone in an old four-story apartment building on Scott Street between Fell and Oak, illegally subletting an apartment from an eccentric writer who had left for pastures new in Washington, D.C. (A few months later I would be thrown out of this apartment by the yuppie landlord who’d purchased the building.) Most of the things in the apartment were his—the dusty books, the big leafy plants perched on shelves, the bed—even the phone and the answering machine. None of my friends lived in the un-hip Western Addition and my neighbors were older, antisocial types who seemed to be retired, nursing various sorts of addictions, or on disability.

So there I was, sitting on the bed at around 5 pm that Wednesday afternoon in October. I had decided, luckily as it turned out, not to go to my lesbian and gay film class at City College. Taking the K streetcar would be too much of a drag this evening, I mused, especially when I would have to wait for it in the dark and fog after class got out. I was just resting, then, or more accurately moping, as I often did in those rootless first years in the City. Suddenly the building began to shake. Even worse, it began to groan and creak. The creaking sound as it rocked from side to side was indescribable. “Oh God!” I remember saying, rooted to the bed in panic. Should I run for the doorway? It seemed to last forever. I was sure in that moment that the house was going to go down, that I was going to die. My mother, who’d lived in Southern California as a teen and young woman, had always told me to run for the doorway in an earthquake. So I stumbled belatedly to the doorway. Around the time I got there the shaking stopped.

I had no idea how serious it was, of course. Nor had anybody else in the building. My phone was dead, the electricity down. As I wandered around the darkening living room, I noted that plants and books had fallen off the shelves, a few cracked plates in the kitchen. I was still stunned—but at least it was over.

One of the downstairs neighbors, a gay man, came up to turn off my gas. Even a natural disaster didn’t bring my oddball neighbors together, though. We all drifted back gloomily to our silent, dark apartments. I lit a candle and lay on the bed. I was reading everything I could by the English playwright Harold Pinter at the time, so I picked up a collection of his grim plays to read as I waited, in limbo. I felt terribly vulnerable—afraid to go out, cut off from the world. When my phone did come back on I called my friend Elgy, a flamboyant Irish journalist in her forties who lived in the Mission. Sounding almost defiantly exhilarated, she described what a fun time she, her boyfriend, and their roommates were having, the party atmosphere in their house. “I didn’t mind it a bit!” she said.

This seemed to be true of every couple I spoke to about their experience of the quake. It made me even sadder in the days ahead, that no one admitted to any feelings of fear, like the terror I’d felt of dying alone in a creaky old apartment building in a new city, far from family and loved ones. I seemed to be the only one among my acquaintance who had experienced anything negative. My friend Denise, another journalist, had sped off to the Marina to document the burning houses. She had seen a writer friend of ours riding by on her motorcycle; apparently, they’d shouted gleeful hellos to each other. Another writer friend described cuddling with his girlfriend in the aftermath of the quake. If I’d had a lover, I thought, it would have been so different.

But all I had was the strangeness of being woken up at 5 am the next morning by my stepfather, Nathaniel, calling from Ireland. I didn’t, of course, know yet about the Bay Bridge collapse and the seriousness of the Marina destruction, nor could I see the gruesome images of the Cypress Freeway that people around the world were viewing on television.

“Are you all right?” my stepfather demanded.

“Yes… why are you calling me so early?” I replied groggily.

“To see whether you’re OK, you eejit!” he snapped. Like most of the few expressions of love in our family, this one went unappreciated by me at the time. It’s only now, 10 years later, and years since we’ve been in contact, that I’m touched that he rang.

And in another sort of earthquake, the family that I left behind in Ireland in 1988 has splintered and disintegrated. My stepfather dumped my mother in 1994 for a younger woman; she moved to another Irish town and died suddenly in 2002, of the breast cancer that she’d remained silent about—at least to me—for years. Although I was with her at the end, I never understood why she didn’t call me after the earthquake, or after the equally shattering experience of 9/11. The world has upended twice since I’ve been in Northern California; now with this global recession we appear to be facing an even more insidious and inevitable societal collapse and implosion. It requires great strength and resilience to keep moving forward. Even more so in the age of Trump.

I don’t know if the experience of these life-changing events toughens us or weakens us. Perhaps the people I knew back then who reacted to the earthquake with bravado carried their own scars, too. Now I’m old enough to know that they must have, because we all do.