The Abstract-Impressionism of Berthe Morisot and Joan Mitchell 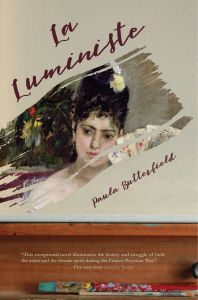 Guest blogger Paula Butterfield’s novel about the life and work of impressionist artist Berthe Morisot, “La Luministe,” will be published by Regal House on March 15, 2019. She stops by to discuss the surprising similarities between Morisot and a much more modern female artist… 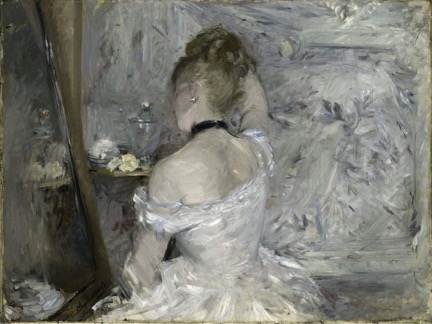 The Abstract-Impressionism of Berthe Morisot and Joan Mitchell

As I researched Berthe Morisot for my historical novel, La Luministe, I saw elements of this Impressionist artist’s work that hinted at Joan Mitchell’s paintings, which would follow one hundred years later. (See the right side of Woman at Her Toilette, above.) The brushstrokes on Morisot’s unfinished canvases, in particular, look like the work of the Abstract Expressionists of the 1950s. As art critic Sam Smee has written, “In the 1880s, Morisot experimented with unprimed canvases and a lack of finish that looks radical even today — closer at times to Joan Mitchell than Paul Cézanne.” (Washington Post, August 21, 2018)

In turn, painter Joan Mitchell was labeled an “Abstract Impressionist.” It was a term coined by Elaine de Kooning, who conflated the Impressionists’ interest in the optical effects of nature with the Abstract Expressionists’ interest in the visual representations of emotional or spiritual states. Mitchell was compared to Monet in her use of watery surfaces and reflections of the sky. During the 1970s, Mitchell even lived in a house next to Monet’s former home in Vetheuil.

At first glance, Morisot and Mitchell’s lives had much in common. Both lived in France, both came from well-off upper-class families, and both were involved in difficult relationships with well-known artists—Morisot with Edouard Manet and Mitchell with Jean-Paul Riopelle. And each artist had great feeling for landscape, especially trees. Morisot, as one of the founding Impressionists, painted en plein air. She felt sustained by trees. The Bois de Boulogne, “the lungs of the city”, was her refuge from modern Paris, and the forested park provided the setting for many of her paintings. Mitchell felt an affinity for trees, as well. When she was in the hospital recovering from hip surgery late in her life,

“…they moved me to a room with a window and suddenly…I saw two fir trees in a park…and I was so happy. It had to do with being alive, I could see the pine trees, and I felt I could paint.”

Green blotches traverse a neutral background in both canvases. Although Morisot’s painting is, technically, realist—a recognizable house and figures appear in the middle-ground. The figure on the right serves as an accent comparable to Mitchell’s perfect fuchsia-colored accent in roughly the same position in My Plant.

Do you see what I mean? Here’s another example. In the paintings below, there are similarities in composition (emphasis in lower-left corner), brush strokes (as scumbled and breezy as the wind at the English seaside), and palette (muted blue-grays with accents of red, green, and blue):

In 2014, an untitled work of Joan Mitchell’s brought $11.9 million at auction, the highest price garnered by a woman artist to date—supplanting the $10.9 million brought by Berthe Morisot’s After the Luncheon in 2013. It’s appropriate that Morisot and Mitchell top the list of most valued women artists. Separated by a century, these two women artists shared not only lives lived in France and devotion to their art, but also a way of seeing.

Author Paula Butterfield taught courses about women artists for twenty years before turning to writing novels about them. La Luministe, her debut novel, earned the Best Historical Fiction Chanticleer Award. Paula lives with her husband and daughter in Portland and on the Oregon coast. Still committed to sharing women’s stories, she is currently working on her next book about rival American artists. You can find her at http://www.paula-butterfield.com or @pbutterwriter.