This vigil took place in the Castro in SF the evening after the shooting.

I woke up last Sunday morning to news of the Orlando LGBT club massacre on Twitter. It was a terrible moment. The first pieces of news said that 20 people were dead, which was unbelievable enough. I believe the last count stands at 49.

I won’t mention the shooter by name. He was clearly a sad, sick, twisted soul. The fact that he had visited Pulse on a regular basis and been treated kindly by the patrons there just makes things worse.

What has made things better, at least for me: the images of President Obama and VP Joe Biden visiting the memorial for the fallen really helped a lot. What has fundamentally changed in America is that LGBT people are now being treated with respect. The dead and wounded victims in that nightclub were seen as young Americans and everybody’s children. And that’s a huge, huge change that has taken place in my lifetime.

Because the issues of gun control and gun proliferation in the US are going to be here for a very long time.

It seems weird to say it in this context, but happy Pride Month. 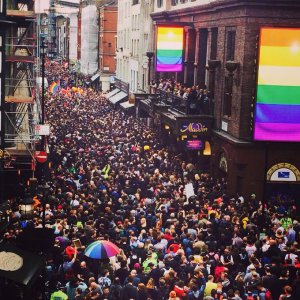 A march in London in support of the Orlando victims.