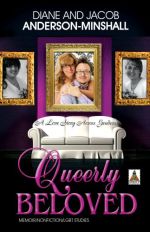 I’ve always been fascinated by gender diversity. A memoir has just been published that explores what happens when one partner in a long-term lesbian relationship transitions to being a man. What surprised me about Queerly Beloved (Bold Strokes Books, May 2014, $9.99 ebook) is that the authors are extremely candid about the emotional challenges such transitioning can involve.

In a nutshell: Years ago, a driven young woman called Diane met another young woman called Suzy. They instantly bonded. After 15 years of what seemed to be a happy long-term relationship, including several wedding ceremonies, Suzy began to see herself as a transgender male—and transitioned to becoming a man called Jacob. While Diane was ostensibly supportive, she was also crushed. The two are still together, legally married, and Diane still works in the queer community; she’s executive editor of The Advocate. However, since her husband is now a man, she has to put up with the baggage of being viewed as a straight woman.

My take: First of all, I was consistently fascinated by this book. The book is narrated in two voices, Diane and Suzy (Jacob) sections, making it a very intimate read. I found myself liking Jacob’s voice more and identifying with his personality more, which was strange for me. I don’t identify as a butch woman, but I have always felt androgynous. Jacob’s voice seemed gentler to me; he seemed a kinder, more balanced person.

What complicated the book for me is that I felt like I was sitting in on a marriage counseling session. By the end of the book I was beginning to feel that Diane, admittedly a control freak, was deeply unhappy, even though her commitment to keeping the *relationship* going was absolute. A hair-raising story of Diane’s one night stand with a man in New Orleans when she was trying to get pregnant, while bravely told, made me wonder about the ongoing stability of the relationship. I believe the book would have been better entitled “A Marriage Across Genders,” because what we have here is a beautiful, sometimes overwrought story of an embattled marriage.

I found it poignant that Diane most misses the companionship of her sympathetic lesbian partner, who has effectively disappeared. Jacob admits that testosterone has had a big effect on his personality. In his case, he finds it positive. Men treat him like a buddy (something he didn’t expect). He “passes” well. Both gay men and women flirt with him.

It couldn’t escape my attention that Jacob, because of his male role, is now given more power in the world, while glamorous Diane has been relegated to the role of wife, a wife desperate to keep her husband’s attention, it seems. And I think those changing dynamics within the couple are reflected in the bittersweet tone of the book. It’s a fascinating read, and it is clear that these people still have a deep bond, but I am not sure that their story is a simple “love story” any longer.